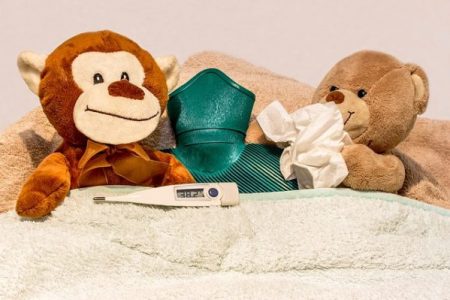 Boo – it’s flu season and boy has it hit with a vengeance. Officially beginning in October, The CDC says this my be the worst flu season in a decade.

Because there’s two different strains making the rounds this year.

William Shaffner, MD who is an infectious diseases specialist and professor at Vanderbilt University says we’re getting a double whammy this year.

“This season has been dominated by a form of the flu called influenza B which is completely odd since influenza B doesn’t typically create large outbreaks.

H1N1 flu viruses are also starting to rise and we may have a double-barrel season of influenza B followed by H1N1. We have all these odd ingredients coming together so that we have, at this juncture, an awful lot of flu with the potential for being as bad as our last bad year, if not worse.”

Better to spread a little bad news now instead of spreading flu germs.

Speaking of flu germs, here’s a quick reminder of how to avoid the flu!

I write about the flu every year because it’s so dangerous. Just yesterday, I read that 2 years ago the flu season was the worst in a long time and this year is heading in that direction.

You can read my original post at “Understanding Influenza (The Flu).

The quick version of how to avoid the flu goes like this:

I have an immunity blend along with Elderberry Extract and Elderberry Wellness Syrup for sale online and in the aromatherapy shop in Kernersville. I’ll do my absolute best to keep you healthy using plant-based products that actually work.