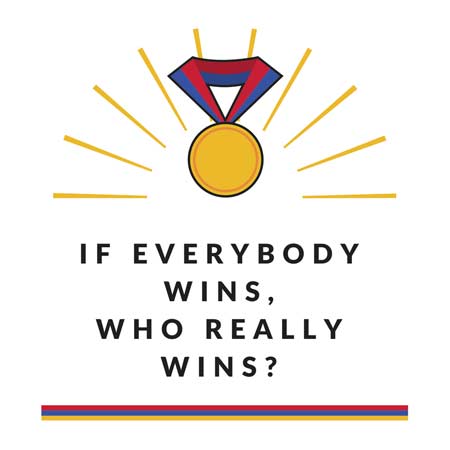 If everybody wins, who really wins? I had an eye-opening conversation with a friend recently about this very subject. We were talking about some of the people she works with that don’t do their job because “they don’t want to” and there’s no motivation to do any different.

She went on to say that these particular people are the first generation that got a blue ribbon just for showing up on Field Day. They received everything equally so that nobody’s fragile self esteem was damaged.

Needing to process that statement, I looked at her for a moment and then it hit me.

Everyone of them got a blue ribbon on Field Day at school so that everyone would win something and nobody walked away hurt and disappointed. Everyone is a winner – everybody is a king.

This trend began some years ago because some “authority” told us that children need constant positive feedback to grow into self-confident adults. If someone wins, then someone loses and somebody might feel bad about themselves so let’s just make everybody the same and then everybody feels awesome! My friend’s co-workers are the first generation of “Believe. Achieve. Succeed.”. And it’s been taken one step too far.

I understand the premise behind it, but not the reasoning. Nobody wants to feel the sting of disappointment – especially when you really put forth your best effort.

But if you never learn the agony of defeat in life, then how do you learn to gracefully handle the thrill of victory? If everything is awesome, how can anything be awesome?

I remember the first time my son came home from school sobbing with disappointment because he didn’t win. Everyone in his kindergarten class submitted artwork for a contest at his school. He didn’t win anything at all – not even an honorable mention. The artwork was awesome (of course it was!) so I did what any parent would do, I called his teacher.

Then the hard part came – gotta tell my 5 year old that sometimes life just stinks. It’s not because he didn’t do his best, not because he was disliked.

He didn’t win anything because someone else was better at art than he was.

If everybody is a winner at everything, then how do you learn what your gifts and abilities are? How do you discover a passion for something when you get a gold star just for showing up and breathing?

If everybody gets a blue ribbon, does that mean everybody is going to be a doctor? Or lawyer? Or succeed at college life?

See what I’m getting at?

Healthy Self Confidence Instead of Over-Inflated Ego

Michael Sigman, in writing for the Huffington Post, says this everyone-wins-a-trophy mentality simply breeds a false sense of self-confidence:

“Grade inflation promotes ego inflation, the opposite of healthy self-confidence. “We want to encourage effort, especially among young kids,” says Jean M. Twenge, author of The Narcissism Epidemic: Living in the Age of Entitlement. “But the ‘everybody gets a trophy’ mentality basically says that you’re going to get rewarded just for showing up. That won’t build true self-esteem; instead, it builds this empty sense of ‘I’m just fantastic, not because I did anything but just because I’m here.’”

By fighting to earn my blue ribbon (or A, or whatever the prize is) I learned good sportsmanship, motivation, self-confidence along with knowing what I was good at and where I was lousy.

I can tell you right now, absolutely NO ONE was concerned about building up my fragile self-esteem. It was all about doing better than you did the day before, studying hard so you didn’t get grounded for bad grades and finding (and fitting in with) friends you enjoyed playing with.

A Learned Sense of Entitlement

Mark Merrill writes about this learned sense of entitlement in a blunt way:

“It seemed to start in the early 90’s. Maybe it was in little league sports, maybe somewhere else. Someone came up with the idea that there would be no losers. Maybe they didn’t want to “damage the children’s self-esteem.” Thus, everyone wins. Everyone gets a trophy. Sure, maybe at a very young age it’s no big deal, but kids are smart cookies. As they get a bit older, they see what’s happening and it de-motivates them. The less talented kids have no reason to do better and the more talented kids have little motivation to excel. On the other hand, it’s also dangerous for our children to think that if you can’t win, you shouldn’t play. That’s a lie too. There is often incredible benefit in being on the basketball team even if you’re not the starter or to sing in the choir even if you’re not the star.”

Even if you’re lousy at something, shouldn’t you experience it just to be a well-rounded human? If you win at everything, does that make you a good kid? If you don’t win, then what?

I love this explanation about raising mentally tough and healthy kids by blogger Anna McAffee:

“We set them up for failure by not giving them realistic expectations. We do not prepare them for healthy criticism, nor do we allow them to determine their gifts and abilities. By telling them that they can do whatever they want, they never have the chance to figure out what they are good at and what they are not good at. Working to develop well-rounded and confident children is not a bad thing. The problem arises when we tell our children that they are going to be the very best at everything they set out to do.”

While I think it’s good to let children know they can attempt anything at all, we also need to temper this with teaching them to look for and hone their gifts and abilities instead of just expecting to be patted on the back for simply showing up.

How This Turned Into The Law Of Attraction

While this mentality of “you can have, be and do anything you set your mind to” is great in theory for motivation, it stinks in reality. I think this whole entitlement mentality paved the way for the huge “law of attraction” explosion.

The Law Of Attraction basically says whatever you want, all you have to do is dream it, think positive thoughts and it’s yours. Whether that’s a million bucks, a fabulous job, the prettiest spouse in town – whatever. You want it, you got it because with the law of attraction, nobody loses and everybody wins!

So what happens when the dream doesn’t happen? How do you handle bitter disappointment when you’ve never known loss or defeat because, you know, everyone’s a winner? There’s this false sense of reality because the law of attractions says I’ll succeed at everything I try!

When it doesn’t happen, then what? If you’ve always gotten the blue ribbon for just showing up, then you really don’t know what failure and disappointment is.

What happens the first time your boss criticizes you because you could’ve done a better job on that project or you need to start showing up on time? If you don’t know any different, how do you handle that criticism?

There’s a real shock! My friend said people quit their job at her company because they just didn’t feel like doing the job they’re being paid for! When they were criticized for not stepping up, it made them so mad, they quit.

I swear my eyes are rolling right out of the back of my head. Jeez…

Healthy Self Esteem and Self Worth

We all need to receive positive feedback – especially as a child. I get that. And yes, if you work hard enough, you’ll probably get what you want or some semblance thereof. Maybe. But if you’re tying your self esteem and self worth to winning and losing, you’re screwed from the start.

Healthy self esteem and self worth comes from the inside. You’ve got to know in you’re own heart that no matter what people think or say, YOU are a worthy person. Not because you got a blue ribbon for showing up on field day, but because you’re a human being worthy of taking up space on the planet.

Some things, you just have to learn on your own – including disappointment and criticism. Or with the help of an awesome and compassionate holistic life coach. :0) Fill out this short contact form and let’s talk about this today!